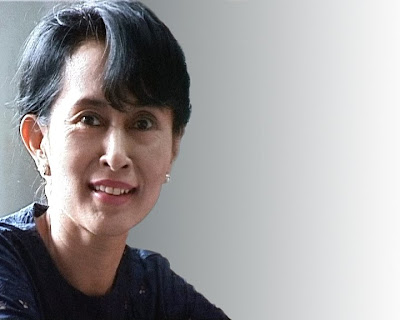 Yangon - Myanmar opposition leader Aung San Suu Kyi is due to issue an "important and positive" statement next week, her lawyer Nyan Win said Wednesday. Suu Kyi, who is still under house detention in her Yangon home, is expected to deliver the statement in the name of the National League for Democracy (NLD) opposition party on November 17, Nyan Win said, without divulging details on the contents of the pending message. "

She has agreed on a party statement which is considered important and positive," Nyan Win told the German Press Agency dpa. Suu Kyi met her lawyer Nyan Win at her lakeside home-cum-prison on Wednesday which is Myanmar's National Day. At the meeting, Suu Kyi passed her lawyer a letter to be sent to Senior General Than Shwe, the junta chief. The contents of the letter were not disclosed. Suu Kyi, the 1990 Nobel peace prize laureate, was allowed to meet with US Assistant Secretary of State Kurt Campbell and his deputy Scot Marciel during their landmark visit to Myanmar on November

The US envoys called on Myanmar's ruling junta to allow Suu Kyi more access to her NLD party executives, who have yet to decide whether they intend to contest a general election planned next year. Suu Kyi, the daughter of Myanmar independence hero Aung San, has spent 14 of the past 20 years under house detention in her family's compound. In July, she was sentenced to another 18 months under house arrest, which would keep her out of the political picture while if the government stages an election some time next year. The US and other Western democracies have stressed that Suu Kyi and other political prisoners should be freed before the polls, if the junta expects them to be deemed credible. Suu Kyi's NLD party won the 1990 general election by a landslide margin, but was thereafter denied power by the military, which has ruled the country since 1962.
Publicado por Birmania por la Paz- Burma Campaign Spain- Miembro del TBBC en miércoles, noviembre 11, 2009