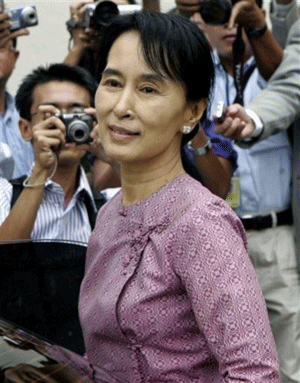 Burmese opposition leader Aung San Suu Kyi canceled a meeting with leaders of her party, the National League for Democracy (NLD), because government authorities exclude her longtime colleague Tin Oo, who is under house arrest, according to Burmese state-run newspapers.

The authorities had given permission for Suu Kyi, who is also under house arrest, to meet with NLD party leaders before her scheduled meeting with Assistant Secretary of State for East Asian and Pacific Affairs Kurt Campbell on Wednesday, according to The New Light of Myanmar in a story published on Thursday.

Suu Kyi refused to attend the NLD leaders’ meeting without Tin Oo, who is a vice chairman of the party.

“What she wanted is that all NLD leaders should be involved in the meeting,” said Nyan Win, an NLD spokesman.

Meanwhile, ordinary Burmese—politicians, businessmen, schoolteachers, and others—were transfixed on the news about Suu Kyi’s meeting with a four-member US delegation visiting the country on a two-day information gathering mission, according to Rangoon residents.

Relations between the US and Burma are in the preliminary stages of direct contact between the two governments, which have not had normal relations for nearly 20 years.

US economic sanctions against Burma have been in force for more than 10 years. Both countries have expressed a willingness to resume negotiations designed to improve relations.

Journals, newspapers and broadcast media were allowed to report details about the US delegation’s visit and publish photographs of pro-democracy leader Suu Kyi and the members of the delegation.

Some Burmese journalists working for local journals and foreign news agencies were allowed to photograph Suu Kyi and the US delegation, but no questions were permitted.

A journalist in Rangoon said The Myanmar Times and Bi Weekly journal sold very well on Thursday because of the coverage and photographs of Suu Kyi.

“People also talked a lot about Suu Kyi in teashops and markets,” she said.

A government worker in Rangoon said, “I wanted to see and read the news. As soon as I heard there were photos of Suu Kyi published, I went and bought a newspaper.”

A schoolteacher in Rangoon said, “This is good news for us. But, I can’t believe it. We have to wait and see.”

Suu Kyi news was also carried on state-run media such as Myanmar Ahlin, and The Mirror, as well as state-run Television MRTV.