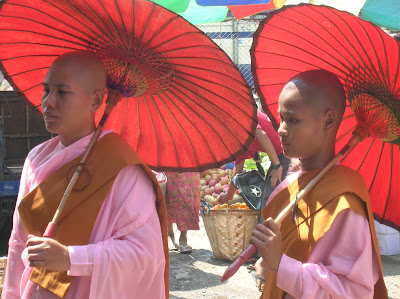 More than 200 Buddhist monks and nuns asked for alms donations in Chiang Mai, Thailand, on Monday to send to Burmese refugees who live in camps along the Thailand-Burma border.

The project was supported by the International Network of Engaged Buddhist (INEB), the Friends of Burma and other civil society groups that turned out for the event.

The INEB is a network of Buddhist monks, nuns, social activists and community leaders under the patronage of the Dalai Lama, Thich Nhat Hanh and other leading Buddhists.

Aphatsorn Sombunwatthanakun, a coordinator of Friends of Burma, told The Irrawaddy on Monday: “Some advisers from our organization are members of the INEB. We will send the donations to camps in Mae Sot, Mae Hong Song and Wieng Heng.” Donations included money and other material that could be used by refugees.

A young Shan woman, Ying Horm, told The Irrawaddy: “I cannot go inside my country to help. But now I can help in another way, so I feel satisfied.”