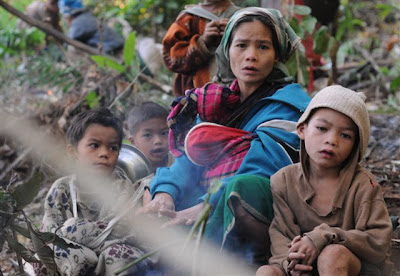 The first phase of this attack started in late January and resulted in the killing of 3 villagers, the destruction and burning of 2 villages and the displacement of 1,000 people in Ler Doh and 1,000 in a different area of Hsaw Hti. (please see January reports at www.freeburmarangers.org). The second phase of this attack started on February 5rh, is continuig today with 2,100 in hiding, 14 schools abandoned and 46 houses burned in the Toe Hta area, 28 houses in the Ka Di Mu Der area , 30 houses in Hti Baw Hta, and earlier 11 houses burned in Kweh Der. Total houses destroyed in these attacks is 125. Including farm huts and a clinic it is about 140 buildings destroyed.

The Karen resisitance (National Liberation Army) are trying to protect the people from these attacks and the Free Burma Ranger relief teams and others are providing humanitarian assstiance. . At least two villagers have been shot dead by the Burma Army which does not discriminate between combatants and civilians as it seeks to terrorize the Karen people. (See three reports UPDATE OF BURMA ARMY ATTACKS, MURDERS, DISPLACEMENT AND FORCED LABOR IN KAREN STATE, BURMA from January 21-31 .)

The FBR teams with the help of Partners are also bringing new medical supplies and are working with township medics to help treat those who have fled. These people, unable to return to their villages, now face life on the run and without sufficient food. They are also much more likely to suffer from illnesses such as dysentery, acute respiratory infections and malaria. The IDPs are trying to keep their children's education going, but 14 schools have been closed as a direct result of these attacks. One clinic has also been burned to the ground by the Burma Army.

FBR teams saw Burma Army troops with villagers they were forcing to carry loads for them. In every area here that the Burma Army controls, they force villagers to carry loads and work for them. In spite of the threat of punishment of death, the villagers attempt to avoid this work and actively support the resistance instead. But often they cannot avoid carrying loads for the Burma Army occupying troops. 12 new FBR teams have joined the existing FBR teams in these areas and are providing medical and other humanitarian assistance. Over 2000 patients have been treated and over 100 loads of relief materials have been distributed by the new teams. There is now a need for more medical supplies to help those displaced by the new attacks. (Thanks to Partners Relief And Development (PRAD) and others who are sending more medical and food support and thanks to PRAD and Genocide Intervention Network for help with the early warning system of radios and other communications equipment that villagers use to warn each other and better escape impeding attacks.)