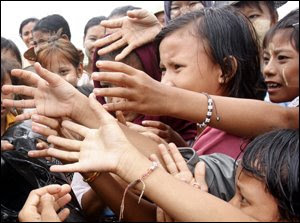 The Rohingyas were displaced from Arakan state in Burma, where they're reportedly mistreated by the military.

Now, the peak political body for Burma's ethnic groups has called on Australia to help set up a multi-national group to address the lack of democratic progress in Burma. The Ethnic Nationalities Council represents seven ethnic states in Burma, making up about 40 per cent of the population.

SAKHONG: We would like to achieve in this mission to receive support from Australian government because we are having big, big problems in Burma. The military regime is going to go ahead with their own road map and they are intending to have elections in 2010. And we think that this will not bring peace and democracy in our country. So we need to do something now and we would like to request Australian government to call for what we call multi-party talks on Burma to bring all the international community to have a common policy towards Burma, to put pressure on the military regime so that we can have a dialogue. We need a negotiated settlement. So we are supporting the United Nations General Assembly that call for a tripartite dialogue amongst the military regime, the 1990 election winning party led by Aung San Suu Kyi and ethnic groups.

LAM: The military regime already has its own road map. In fact, it's slated 2010 next year for general elections. What hope do you have to get the military to change its system at this late stage?

SAKHONG: We do think that they still can change, we do still have time, even the United Nations Security Council last year called for a broad-based constitution review commission. That means we need to review the constitutions that are adopted by the military ?? so that we can have a compromise. We need to accommodate each other. If we don't do that, then the result will be another 50 years of civil war. The constitution that they adopted last year in May should be reviewed. We also need to discuss electoral law and then we need to discuss also about security arrangements.

SAKHONG: The military of course is doing it their own way but they also depend on our neighbouring countries like China and India. So if China, India and the international community and the people of Burma together say that this is unacceptable. So we need to change it and we need to revise it and then they have to respect also the result of 1990 elections. And the people of Burma already have given the mandate to Daw Aung San Suu Kyi, and then we ethnic nationalities also should be there. We Ethnic Nationalities are for a united Burma. What we want is only democracy, equality and a federal system and we are not for independence.

LAM: It would seem from what you've told me so far that the response from both New Delhi and Beijing has been fairly lukewarm to your call for more dialogue with the ethnic groups?

SAKHONG: Currently it may look like that but if we look at the reality on the ground if they really need stability in Burma I think change is better for even for China and India. If you look at China, for example if you compare Kunming Yunnan province and Guangdong in the eastern part, the difference is huge. It's because of the problems in Burma.

LAM: Has the Rohinga issue raised the profile of the ethnic groups in Burma?

SAKHONG: Of course, of course Rohinga of course is part of the human rights abuses and the lack of democratic rights in our country. I think we need to respect human rights, we need to keep them the basic rights that they deserve, the citizens the rights that they deserve. But unfortunately, because of military regimes and all these dictators, they do not enjoy as other citizens in Burma.

LAM: But do the Rohingas enjoy any role within the Ethnic Nationalities Council of Burma?