The impact of the war- el impacto de la guerra. 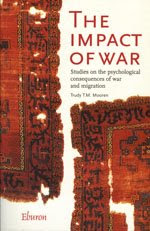 What are the consequences of experiences of war, such as bombardments, the loss of family members, the destruction of one's house, and on top of these, of flight and migration for psychological well-being? In what way do survivors cope with painful memories, in the short or long run? Is an intervention program offering counseling effective in its attempts to alleviate daily stresses and to strenghten capacities to face future difficulties? The impact of war is based on emperical studies conducted among war-stricken people from Bosnia and Herzegovina and among child survivors from the former Dutch East Indies in the Netherlands. Both groups have been subjected to war, persecution and displacement and had to redefine past, present and future.
Publicado por Birmania por la Paz- Burma Campaign Spain- Miembro del TBBC en jueves, febrero 19, 2009