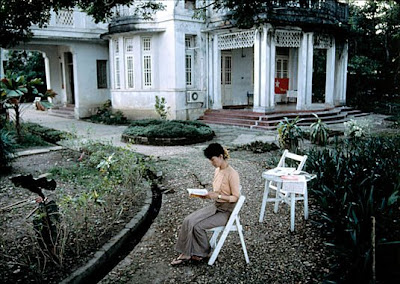 As Voltairine DeCleyre says in 1914 in The Making of an Anarchist, "…it is easier to conquer war with peace…I can see no end of retaliation unless someone ceases to retaliate. But let no one mistake this for servile submission or meek abnegation; my right shall be asserted no matter at what cost to me, and none shall trench upon it without my protest.”

And then Emma Goldman in “Was my life worth living?”“Love of freedom is a universal trait, and no tyranny has thus far succeeded in eradicating it.

It’s a real honour and pleasure to be here at the NOWSA conference. I'd like to pay my respect to the Traditional Owners of this land.

Woman, lay thee down on the Earth, rub your cheek on soil, taste, smell, drink of Mother Earth.

I am Woman, Earth lover.

Will I be burned at the stake if I enter into my power?

Will the women of Sarayacu in Ecuador be burned at the stake for their actions?

This past year these women resisted the Argentine petrol company CGC and the U.S. company, Burlington. The women organized themselves and said that if the men decided to let the companies in, they would have to start looking for other women... and another territory. They said they would not allow their children and the young people of Sarayacu to become workers and slaves of the big oil companies. This was a non-negotiable decision.

This was an example of women standing up and saying “no” to the existing systems.

In a recent article by Barbara Ehrenreic , she says “What we need is a tough new kind of feminism with no illusions. Women do not change institutions simply by assimilating into them..We need a feminism that teaches a woman to say no – not just to the date rapist or overly insistent boyfriend but, when necessary, to the military or corporate hierarchy within which she finds herself. (This article was first published in the Sunday Opinion section of the Los Angeles Times.

We need a kind of feminism that aims not just to assimilate into the institutions that men have created over the centuries, but to infiltrate and subvert them. Or take them down!

Ecofeminism goes a step further by drawing the connection between dominating behaviours of the patriarchy and humankind’s exploitation of the Earth.

Ecofeminism looks closely at the political, economic, and social systems that are violent at their very core and find their power through the oppression and subordination/subjugation of women, indigenous peoples, sexual minorities and so on. and then it goes on to say that until we have social justice we won’t have justice for the Earth. Until we halt the ongoing cycle of violence, the exploitation of peoples worldwide for the sake of greed, profit and power, we will continue to do harm to the Earth. And hence to ourselves.

I’d like to look at some of the challenges we face in working towards social and environmental justice and how the ruler system reinforces a culture that makes critical awareness and response practically impossible.

First, let’s name some of the challenges we face in the world today.

Then on top of that, or I should say underlying this, there’s the Earth issues: global warming, loss of topsoil, scarcity of water, poisoning of our water and air; there’s nuclear radioactive waste, genetic engineering, a mass extinction crisis (we’ll have lost 3 more species on the planet by the end of this plenary, half by the end of this century) the list goes on and we hear about it all the time; it’s a veritable litany of threats.

Indeed, it’s no wonder that any person might feel overwhelmed. If we are not in denial, we will certainly feel grief, outrage, fear or hopelessness.

Yet, the dominator system has a strong taboo in place against the expression of these sorts of feelings and even pathologises them.

There must be something wrong with you if you’re feeling so angry about having your land stolen. Or if you’re feeling sad about those trees being felled. you don’t want them to fall on your home do you? Or why are you so upset that you don’t get paid as much as the men in the office? Or why do you get angry when there’s no sign interpretation at the conference or no ramps on yet another building?

Feelings are the domain of women, a weakness and so on.

Instead of the feelings being affirmed as healthy reactions to the times – the natural reaction, the caring reaction to the violence that plagues our planet, our home and the suffering inflicted upon our brothers and sisters – instead, our feelings are denigrated and as a result we develop sophisticated defense mechanisms to suppress the feelings. Our outrage is turned inwards as we look inside ourselves to see what is wrong with us for having these feelings, and we try to find ways to fix ourselves, to better cope with a dysfunctional society.

Our collective unexpressed feelings of grief, anger, despair and hopelessness combine in a state of social paralysis. And furthermore, the system thrives on a culture of fear that aims to keep this paralysis in place, to keep the majority silent.

The power elite along with the corporations and media are all too happy to reinforce this culture bringing us day after day the most sensationalised and frightful news.

Furthermore, they instill what might be called biophobia or fear of the natural systems, we’ve become increasingly fearful of the very biological fabric which we are inextricably a part of and utterly dependent upon.

We’re encouraged to steep ourselves in technology, to look for safety and satisfaction in our homes and around machinery, computers, movies, video games. These are the creature comforts of the 21st century.

Finally, the paternalistic system goes a step further and ensures us that on the one hand terrorism lurks behind every corner and on the other, all is well. Like women who waited at home while men were made to go to war for so many generations, we are now asked to trust in technology, medicine, militaristic solutions that are counter intuitive to us, and to trust in our ‘leaders’, to wait quietly while solutions are found by those who hold the seats of power. The result is what Victor Frankl, psychologist and survivor or WWII calls the ‘delusion of reprieve’, that it’s not really that bad, it’s going to be okay, scientists will fix it, medicine will fix it, we will be fine. Daddy will make everything allright.

An example of this was when George Bush appeared on TV screens all across the world after September 11th to reassure everybody, that “Everything’s Okay. Go buy, Go fly.” Buying and flying, consumption of goods, these are meant to replace a strong deep and intimate connection with nature and with each other.

Clearly “deep” and “intimate” are not ways of the global hegemony. These ways, often associated with indigenous peoples and with women are all but lost in today’s culture.

Yet, - As Caitríona Reed says in her essay,The Ravens' Dance -" our desire for connection is deep and trustworthy; and the connection we hunger for, the wisdom we seek, is both a birthright and a privilege; it is both intrinsic to our nature and also remarkable and rare—particularly in this time of systemic violence, deception, and greed."

Our challenge is to reach towards a non-dualistic partnership ethic of environmental and social justice – one that honours both the authentic masculine and the authentic feminine, that values both feelings and clear thinking, both nature and the best of technology, both action and reflection. This we might call an eco-feminist ethic and culture for a just and sustainable planet.

Working towards this ethic requires us to redefine how we do our work in the world, whatever our work may be.

Here are some ingredients for working in a new way, a way that does not fall prey to the veils and shadows of the modern day fast motion culture.

1)Value and affirm feelings, both mine and yours, his and hers, as healthy reactions and allow feelings to motivate us to become engaged, to bring us their wisdom and intelligence, they are an integral and ancient part of our being.

2) The results of our work go far beyond what we can see. As Nietzsche said, “Deeds need time, even after they are done, to be seen and heard.” While we might be planting seeds, it may take a while before we see the growth. From the time the English Quakers first took on the issue of slavery, three quarters of a century passed before it was abolished in Europe and America. And in America, the first widespread women’s rights movement took the same amount of time until the right to vote was given to American women. The work for women’s rights is in no way over; it continues on. The same as in any social justice issue; these are long standing campaigns that can span a number of generations.

3) The value is in the speaking out. This is Freedom.

Jewish philosopher Martin Buber, in the 1800s. emphasized the importance of speaking out “Yes” or “No” particularly when we’re the minority view in our society. The person who stands out alone or with a small minority forms the “yeast of a free society”. It’s not a matter of whether we get everybody over to our point of view; standing up for that truth, what we believe in, is what continues to create a free society over and over again.

4) Step out of the box of subjugation, oppression, violence, subordination and all the isms. Let go of all notions, act creatively. Have fun, be ourselves.

Like the famous quote mistakenly attributed to Emma Goldman “if I can’t dance, I don’t want to be in your revolution, that’s no solution." A song written about this goes on to say, "If I can’t sing and shout, you can count me out…I will dance my way to freedom!”

5) The Journey is beautiful. Don’t worry so much about the destination. If we embrace the underlying goal of the awakening or self-realisation, of both ourselves and the planet, then we can move outside of a result oriented success/failure paradigm. Rather than the urgent “I need to achieve this NOW.”, we might feel deep joy from a loving connection with a colleague, a gentle moment with ourselves, or a peaceful prayerful walk in the forest. Every day, every moment is an opportunity for conscious living. This is the complete and whole revolution, both inner and outer! We can work and live from the inside out as well as the outside in.

Aung San Suu Kyi, freedom activist of Burma, or Myanmar now, says, “It is not enough merely to call for freedom, democracy and human rights, there has to be a united determination to persevere in the struggle, to make sacrifices in the name of enduring truths, to resist the corrupting influences of desire, ill-will, ignorance, and fear…. We must first learn to liberate our own minds from apathy and fear.”

This is ecofeminism in motion, a dynamic and organic way of living and making change in the world. We can simultaneously put our attention and energy towards not only a change in the economic, social and political structures and institutions but also an underlying shift that moves us from the fears and apathy that we face towards a total spiritual revolution. a holistic revolution, a complete revolution one that’s both inner and outer.