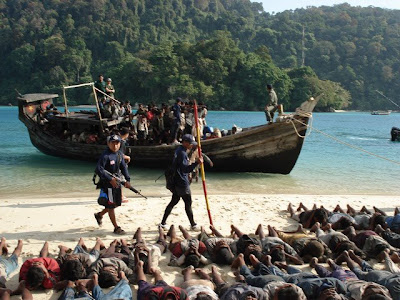 THAILAND has reportedly undertaken never again to tow Rohingya boat people out to sea and abandon them, a brutal policy that led to the deaths of hundreds.

The promise has been made to the United Nations, UN High Commissioner for Refugees Antonio Guterres said yesterday at an international conference on people smuggling.
''That guarantee was clearly given to me twice by the minister of foreign affairs of Thailand,'' Mr Guterres told a correspondent for the South China Morning Post newspaper.

''I also think that what happened has been so shocking that it won't happen again.''

Thai Foreign Minister Kasit Pirom is known to have met surviving boat people in detention in the Thai-Burma border town of Ranong and talked to Burma's ruling junta about the future of the Rohingya.

But until Mr Guterres spoke yesterday following the biggest international meeting so far on the Rohingya, there had been no official acknowledgment that the so-called push-backs would cease.

Khun Kasit cancelled his proposed trip to the Bali conference because of the state of emergency triggered by protesters in Bangkok.

Reports in Phuketwan and the South China Morning Post in January first revealed the secret Thai island where hundreds of boat people were corralled behind barbed wire on a beach before being towed out to sea and left to drift.

Point-blank denials by the Thai army that the policy was in place became less strident once conclusive evidence of the practice and its outcomes was published.

Yesterday the Bali Process on Human Trafficking, a fledgling organisation involving some 75 nations, produced the first real signs of progress on behalf of the downtrodden Rohingya, whose abject plight had been overlooked, even by the UN, for decades.

In Thailand, it is understood that a Department of Special Investigations inquiry to pursue the people-smugglers is continuing, with Phuketwan journalists among those interviewed.

Corruption of officials in Burma-Myanmar, Thailand and Malaysia has trapped thousands of Rohingya and other people from Buma-Myanmar and Bangladesh in a constant coastal cycle of arrest, attempted escape to a better life, and detention again.

Australian Foreign Affairs Minister Stephen Smith said yesterday the people smugglers are now looking to profit from the economic downturn because the situation pushes more people to migrate in search of work.

Australia and Indonesia co-chair the Bali Process on Human Trafficking, and Australia yesterday announced A$3.2 million in extra aid to the Rohingya.

The outcome of the gathering is likely to hearten non-government organisations working with illegal migrants all along the Andaman Sea coast.

In Malaysia, Phuketwan was told recently, Rohingya caught by officials receive six mandatory strokes of a whip before being detained for between three and six months, then returned to the so-called ''revolving door'' of the human trafficking trade.

Those who are fortunate enough to escape sustain local economies in the Thai coastal provinces of Ranong, Phang Nga and Phuket, where retailers in the holiday centre of Patong largely depend on cheap Burmese labor.

The irony is that disclosure of the secret island and the covert push-backs by the Thai army or specially trained local paramilitary has done what the army wanted to do: stop the Rohingya from coming to Thailand.

The push-backs, which began in secret in early December, are believed to have ended within six weeks, once international media attention sparked condemnation of the policy.

It is hoped that acknowledgment by officials from Burma-Myanmar who attended the Bali Process meeting will lead to a dramatic improvement in the lives of the boat people.

However, other reports said that a solution may remain elusive as long as Burma-Myanmar continues to deny that Rohingya are its citizens or acknowledge they have been persecuted.

Interest in Thailand now centres on the future of 78 Rohingya. held in detention in Ranong since January, awaiting the outcome of the Bali Process.

The 78 were the first Rohingya detained and processed in the normal way after Phuketwan and the SCMP revealed the covert process on Sai Daeng island and Thailand's short-lived push-back policy.

Action has yet to be taken against those who introduced the policy and others who carried it out.