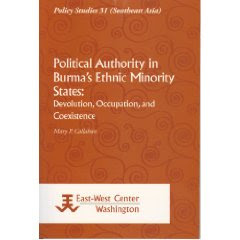 This study examines the enormous variation and complexity that characterize relationships between the national state and locally-based, often nonstate actors who negotiate and compete for political authority in Burma's ethnic minority-dominated states along the borders. Three patterns of relationships are explored: devolution by the national state to warlord-like local authorities; occupation by the Burmese military; and coexistence (with varying degrees of cooperation and understanding) among actors from the national state and local stakeholders. Throughout these border states, leaders of the Burmese government's armed forces and of past and currently-active armed opposition forces operate within a context that is neither war nor peace, but instead a kind of post-civil-war, not-quite-peace environment. To understand the complex political arrangements that have arisen in this environment, this monograph employs the concept of "emerging political complex" - a set of adaptive networks that link state and other political authorities to domestic and foreign business concerns (some legal, others illegal), traditional indigenous leaders, religious authorities, overseas refugee and diaspora communities, political party leaders, and nongovernmental organizations. All of these players make rules, extract resources, provide protection, and try to order a moral universe, but none of them are able, or even inclined, to trump the others for monolithic national supremacy. Conflict resolution strategies have to recognize that these emerging political complexes are not simply unfortunate bumps in the road to peace but instead constitute intricate and evolving social systems that may continue to be adapted and sustained.