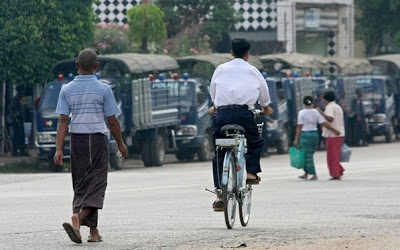 The trial of Aung San Suu Kyi has gripped the hearts of the Burmese people because they respect and love her. Rationally, however, they know they can have little affect on the junta’s show trial now unfolding in Insein Prison.

A prominent writer in Rangoon summed it up in a phone conversation with The Irrawaddy on Wednesday: “The trial has made people feel helpless and even more hopeless.”

There are three factors that account for the lack of even modest public protests by ordinary citizens and political activists—economic hardship, harsh military oppression and lack of opposition leadership.

The people know the trial of the pro-democracy leader is rigged, and that she will soon be sentenced to up to five years in prison. They’re angry, but their anger is suppressed, boiling but contained—they can’t afford to let it overcome their daily struggle to survive and provide for their families.

Win Tin, a prominent member of Suu Kyi’s National League for Democracy (NLD), the main opposition party, said: “People are angry, but they are more concerned with their daily living.”

There’s no doubt that many people are unwilling to openly show their support for Suu Kyi because of the junta’s well-known willingness to use violence against citizens, which creates real, understandable fear. Images of the bloody crackdown on the monk-led protests in 2007 are still fresh in people’s minds.

“The trial has made people harbor more hatred towards the generals than ever,” the writer said, speaking on condition of anonymity. “On the other hand, they are more frightened.”

For Burma, the political tide turned on May 14 when Suu Kyi was transferred from her home to Insein Prison and charged with violating the terms of her house arrest after an eccentric American intruder swam across Inya Lake and illegally entered her compound, where he remained for two days.

A lack of leadership within the political opposition has been a topic of concern. About 2,100 political prisoners, including many potential leaders, are in jail.

Sein Win, an outspoken and well-known Rangoon journalist, told The Irrawaddy on Wednesday, “The leading political party is weak.”

Even so, the ailing, respected journalist said he still believes in the people: “Our people are as courageous as ever since the era of the independence struggle,” in the early 20th Century.

On Wednesday, the NLD held its 19th anniversary of the election in which it won by a landslide, only to see the junta not honor the results, and it issued a strong statement calling for the release of its leader, Suu Kyi.

Since the trial began last week, the junta has beefed up security around Insein Prison and infiltrated members of Sawn Arr Shin, a junta-backed paramilitary group, among Suu Kyi’s supporters, who maintain a vigil outside the gates.

One supporter at the prison said, “They provoke us. One of them deliberately uttered a provocative remark: “‘Why are you guys coming to see the wife of a kalar?’” referring to Suu Kyi’s marriage to a British citizen. In Burmese, kalar is a vulgar term that refers to an Indian and Western people. The supporter said, “We have to hold back our anger.”

While anger is suppressed inside the country, the uproar within the international community is louder than ever.

“It is time for the Burmese government to drop all charges against Aung San Suu Kyi and unconditionally release her and her fellow political prisoners,” US President Barack Obama said on Tuesday. “Aung San Suu Kyi has represented profound patriotism, sacrifice and the vision of a democratic and prosperous Burma.”

The international community, including the European Union and the United Nations Security Council, has all expressed their concerns about Suu Kyi’s trial. Even members of the Association of Southeast Asian Nations have been more outspoken than ever against the junta.

However, seasoned observers are skeptical that the international community will take further steps beyond expressing concern. Again, the ruling generals are experts at gauging international reaction and moving ahead with disdain, ever tightening their grip on power while nullifying the moves of the opposition.

The international community’s competing policies of economic sanctions versus constructive engagement have both had little impact on the junta’s hold on power or influenced its movement toward democratic reconciliation.

Both critics and dissents are also saddened that mounting pressure from the international community will likely have no affect on the trial’s verdict or sentence. After attending the trial last week, British Ambassador to Burma Mark Canning summed it up, “I think this is a story where the conclusion is already scripted.