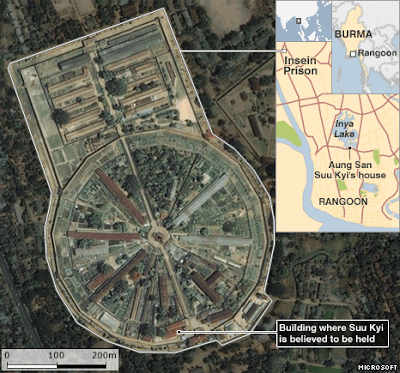 Burmese pro-democracy leader Aung San Suu Kyi is being held in the notorious Insein jail in Rangoon, after being charged with violating the terms of her house arrest.

Human rights campaigners say incarceration at the top security prison, which is known as the "darkest hell-hole in Burma", could be tantamount to a death sentence - especially as the 63-year-old's health is known to be fragile.

He was jailed for more than seven years for political dissent, and was kept in solitary confinement for more than a year, in a concrete cell that was about 8ft by 12ft (2.5m by 3.5m).

There was no toilet in the cell - just a bucket filled with urine and faeces. He slept on a mat on the floor.

Mr Kyi says he was tortured and beaten by the prison guards. He was shackled in heavy chains, with a metal bar between his legs, which made it difficult to walk.

Every morning for about two weeks, he says he was made to "exercise" - forced to adopt awkward positions and if he failed he was brutally beaten.

During this time he was not allowed to shower and was forced to sleep on bare concrete.

He was later moved from isolation and shared an overcrowded cell with four other political prisoners.

Once a week they were able to wash their clothes. But during the stifling summers he said there was no water to bathe.

With only three prison doctors to treat 10,000 inmates, he says diseases such as tuberculosis, scabies and dysentery were rife. Mental illness was also widespread.

Bo Kyi says Aung San Suu Kyi is most likely being held in a special compound built for her detention in 2003, which has a wooden bed and a toilet.

Although the conditions there are probably not as bad as in the rest of the prison, he says he is still extremely concerned for her well-being.

Ms Suu Kyi has spent more than 11 of the past 19 years in some form of detention under Burma's military government.

She was jailed at Insein prison in May 2003, after clashes between opposition activists and supporters of the regime.

Her latest period of house arrest was extended last year - a move which analysts say is illegal even under the junta's own rules. It is due to expire on 27 May.

"Many people have died when they have been detained in Insein, that's a proven fact.

"The fact that Aung San Suu Kyi... now might be subject to a life-threatening detention condition - it's totally unacceptable," she said.

"It's totally unjust and it's time that Asean, China and the rest of the international community finally put their foot down."

Many analysts believe that pro-democracy leader's arrest is a pretext by the military regime to keep her detained until elections expected in 2010.