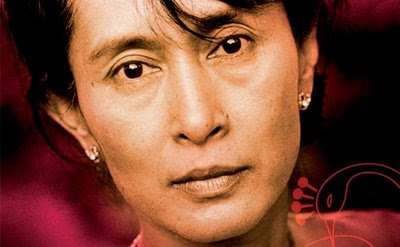 Many feared the worst when the Burmese junta announced that Aung San Suu Kyi would face trial for breaching the conditions of her house arrest. The opposition leader's health was said to be poor after six years of strict confinement. So it came as a surprise to hear Ms Suu Kyi described as "composed", "crackling with energy" and "very much in charge of her defence team" by the British ambassador at yesterday's hearing in Rangoon. Perhaps we should not be surprised though. Ms Suu Kyi has proved her strength and resilience time and again over the past two decades.

Burma's rightful democratic leader even suggested that it is "not too late for something good to come out of this unfortunate incident". With the international attention this trial has attracted for Ms Suu Kyi's cause, she might be right. This despotic junta might have made a big mistake in giving this courageous woman the oxygen of publicity.
Publicado por Birmania por la Paz- Burma Campaign Spain- Miembro del TBBC en jueves, mayo 21, 2009