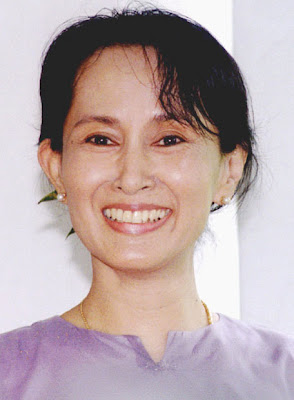 Even during her trial, Aung San Suu Kyi has the ability to make her captors—the powerful ruling generals—angrier and more rancorous than ever.

The generals are now angry not only with Burma’s pro-democracy leader but also with neighboring Thailand which, as current alternate chair of the Association of Southeast Asian Nations (Asean), issued a fairly critical statement against Suu Kyi’s trial and imprisonment.

During a meeting with three diplomats from Singapore, Thailand and Russia last week in the Insein Prison compound, Suu Kyi told the Thai diplomat that she looked forward to working with Asean one day.

How did Burma’s ruling generals interpret her remark?

To work with the regional grouping, Suu Kyi would have to be a leader or high-ranking official of the Burmese government. To the generals—who are hypersensitive about power-sharing—her words were clearly defiant, a challenge to their authority.

They probably thought, “How dare you? You’re a criminal who violated our law. And you are standing trial!”

Allowing thirty Rangoon-based diplomats to attend Suu Kyi’s trial for one day last week backfired. The junta wanted to give an appearance of openness, of conducting a legally correct judicial proceeding.

But Suu Kyi grabbed the opportunity to use her political podium. The 63-year-old Nobel Peace laureate told the diplomats, “There could be many opportunities for national reconciliation if all parties so wished…,” according to a statement by the Ministry of Foreign Affairs of Singapore, whose ambassador met with Suu Kyi in the compound of Insein Prison.

She also expressed the view that “it was not too late for something good to come out of this unfortunate incident,” referring to her trial following the arrest of an American John William Yettaw, who swam across Inya Lake and stayed overnight in her compound, thus violating—in the junta’s eyes—the terms of her house arrest.

On Sunday, an angry Burmese government strongly rejected Thailand’s statement, claiming “The statement of Thailand issued as the alternate chairman of Asean deviates from the principles of the Asean Charter and is tantamount to interfering in the internal affairs of Myanmar [Burma].”

It said that to issue statements, Asean must prepare a draft at the level of a senior officials meeting and then submit it to the foreign ministers level to seek further approval.
Statements are to be issued only after a consensus, it said, and “Thailand did not allow it to be discussed. It informed the foreign ministers only after the issue of the statement.”
Obviously, the generals are angry with any person, or any country, that challenges their maniacal hold on power.

It’s most likely they underestimated the outrage and pressure from the international community that’s erupted since Suu Kyi was arrested and charged on May 14.

Her trial has led to the US renewing its sanctions policy and strengthened the likelihood that the US policy will be tougher following its current policy review.

Also, on Friday, the UN Security Council issued a council statement expressing its concern about Suu Kyi’s arrest and trial and the current deadlocked political situation.

Suu Kyi will be sentenced to from three to five years, either under house arrest or in prison. The best alternative is, of course, house arrest, avoiding the onerous and dangerous conditions at the infamous Insein Prison.

Either way, the generals will have succeeded in keeping Suu Kyi out of the public eye and off the political stage during the buildup to the 2010 general election.

Angry at Suu Kyi. Angry at Thailand. Angry at the meddlesome international community—the generals are angry.